Every month Marisa of maschenfein blog likes to know what’s currently on your knitting needles:

My knitting month was admittedly rather ingloriously. Firstly, this may be due to the long phase of my illness and on the other hand, I have to still finish so many projects around here that I do not know where to start first…

On the needles in… October

The only thing I actually started to knit last month – with autumn and winter coming in mind – and what I’m probably going to still have to finish knitting in October, is a new dwarf cap for the son:

If you follow my blog for a while now, you might notice that I already have knitted various versions of the cap. The last and fitting one unfortunately had a little “accident” earlier this year in the washing machine.
…So the only ones getting to wear it now are the dolls:

Actually this felted version of the cap is not bad either. Only a little too small for the kid sadly…

Fortunately I still had some left over wool from the original cap so I issued a new version of the dwarf cap. I only added a few more stitches in the beginning since the child’s head by now also has grown a little.
Actually the cap is nearly finished by now – I only have to stich both sides together now.

But for the next month, I do promise improvement in terms of knitting on my side.
After all, I have got three review knitting book copies laying here on my desk. So I’m going to knit some of those in october and then introduce the latest ones here soon… 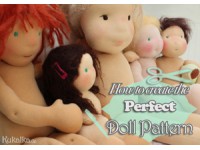 Von Proportionen: How to create a good doll pattern
Was man beachten sollte, wenn man ein Puppenschnittmuster entwirft. / What to keep in mind when creating a doll pattern. 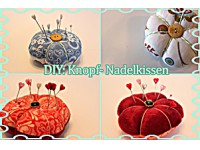 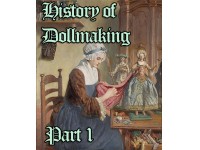